Shaggy X Matt - [Friday Night Funkin']
Five Nights at Freddy's is the popular fun-dark and clicky-horror game series about Freddy and his friends, the animatronics robots, who need to complete all of the pizzeria's missions. 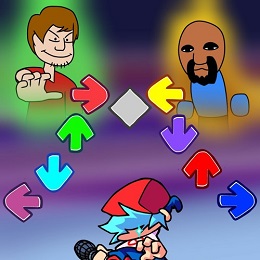 Shaggy X Matt - [Friday Night Funkin'] - The most formidable boss and most powerful entity have teamed up to bring you the toughest experience in Shaggy X Matt. In fact, Shaggy was there to fight Matt and train to defeat Boyfriend, the most formidable opponent. Shaggy and Matt will have to put their best foot forward on Power Link. Matt wants another chance and will fight Boyfriend during Revenge 2, the second song. Shaggy and Matt must perform Final Destination together to defeat Boyfriend. You will need to be focused in order to compete with them. There will be nine notes instead of the usual four. Have fun.