FNF Vs. Dusttale Remastered - [Friday Night Funkin']
Five Nights at Freddy's is the popular fun-dark and clicky-horror game series about Freddy and his friends, the animatronics robots, who need to complete all of the pizzeria's missions. 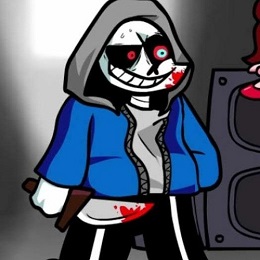 FNF Vs. Dusttale Remastered - [Friday Night Funkin'] is a high-quality FNF mod set for Dusttale, an alternate world based on the critically acclaimed role-playing game Undertale. Sans has steadily plunged into a raging madness, driven by a desire for revenge against humans, and he believes that the beginning of his journey will be to murder all the creatures of the subterranean, including his brother. Sans is going insane, repeating over and over, "It's all the fault of humans!" But when he arrives on Earth's surface, he will encounter a figure that is just as bizarre as he is, Boyfriend. We just know that he wants to sing again and again. Face off against Dusttale Sans in a rap battle; the mod includes ten fresh new tracks that will put your rhythm abilities to the test. Discover the history of Dusttale via a series of animated sequences complemented by conversations that explain our two heroes' objectives. Vs. Dusttale Remastered is a mod that will need a lot of effort and perseverance to achieve. However, I think you can finish this difficult-to-eat cake!